Conservation Without Borders founder and Green Swan Award winner Sacha Dench visits Levenmouth, Scotland, on an expedition around Britain, ahead of COP26

Fife, 6 September 2021: Sacha Dench, dubbed ‘The Human Swan’, is partway through a 3,000+ mile circumnavigation of Britain in a specially adapted, green electricity powered paraglider. She is attempting to break a Guinness World Record for engaging the largest number of people to commit to taking action on climate change.

Levenmouth, Fife, is home to the Scottish Environment Protection Agency (SEPA)’s River Leven Programme and will be the fifth stop on the record-breaking expedition. The programme was established to reverse the decline of the economy, communities and natural environment in a disadvantaged area centred on the River Leven in Fife.

The Leven Programme is the first living case study of the ‘Green Swan Observatory’, an initiative by the renowned think tank and advisory firm Volans, set up to identify and showcase the people, projects and trends disrupting harmful ‘business as usual’. The Leven Programme also forms one of seven official COP26 Climate Beacons around Scotland, which focus on how local areas can transition to resilient, low carbon communities of the future.

Last year Volans announced Sacha Dench as the recipient of the Green Swan Award, which goes to pioneers doing seemingly impossible things for the environment, for her ground-breaking 2019 expedition, Flight of the Swans. The expedition involved flying 7,000 kilometres by paramotor, to help draw attention to the plight of the Bewick’s swan.

Local school Levenmouth Academy expects to welcome Sacha as she lands on the playing fields. The school’s Eco-committee is arranging a pop-up welcome for Sacha whose inspiring project will inspire pupils to think differently and act for change. Sacha will be treated to an aerial view of Levenmouth Academy’s campus wilding project and see how school campuses can include wild spaces for biodiversity and make a space for nature.

Louise Kjellerup Roper, CEO of Volans, comments: “Sacha’s landing in Levenmouth is a powerful coming together of two pioneers in environmental regeneration. Sacha’s efforts in raising awareness for climate change, combined with the work of the Leven Programme to create a truly environmentally regenerative community, makes for an awe-inspiring example of how the seemingly impossible can be made seemingly inevitable. Scotland’s commitment to climate action, sets an example for the rest of the UK. Both Sacha’s work and the Leven Programme are perfect examples of Scotland’s leadership. And natural subjects for the Green Swans Observatory which tracks real world examples of radically better times to come”

Pauline Silverman, Senior Manager at the Scottish Environment Protection Agency (SEPA), Partnerships and Places, and The Leven Programme Manager, adds: “Climate change requires immediate action if we are to adapt and live with its effects, so the Climate Beacons project is a huge source of pride for Scotland. Our aim as a Climate Beacon is to bring together local voices in a just transition and ensure those in the community who may be hardest hit by climate change, co-design the change needed and have the support, resilience and tools to adapt.

“We are excited to use our collaboration to bring science and the arts together to develop the story of change from a carbon intensive past to a low carbon resilient community of the future. Sacha’s landing in Levenmouth is a particularly special occasion as we hope her work will inspire the community to take steps to help Scotland on its path to being net zero by 2045.”

“I am delighted to be meeting people in Levenmouth who are truly focused on answers to the climate crisis – not problems - and as such are inspirations to all.
We’re trying to answer the question “We drove the Industrial Revolution, can we drive the Green Revolution too?” As part of this expedition, we have been investigating how climate change is affecting different regions of the country and showing – in a visually stunning and exciting way - what is happening to help cut carbon and preserve and restore our environment” 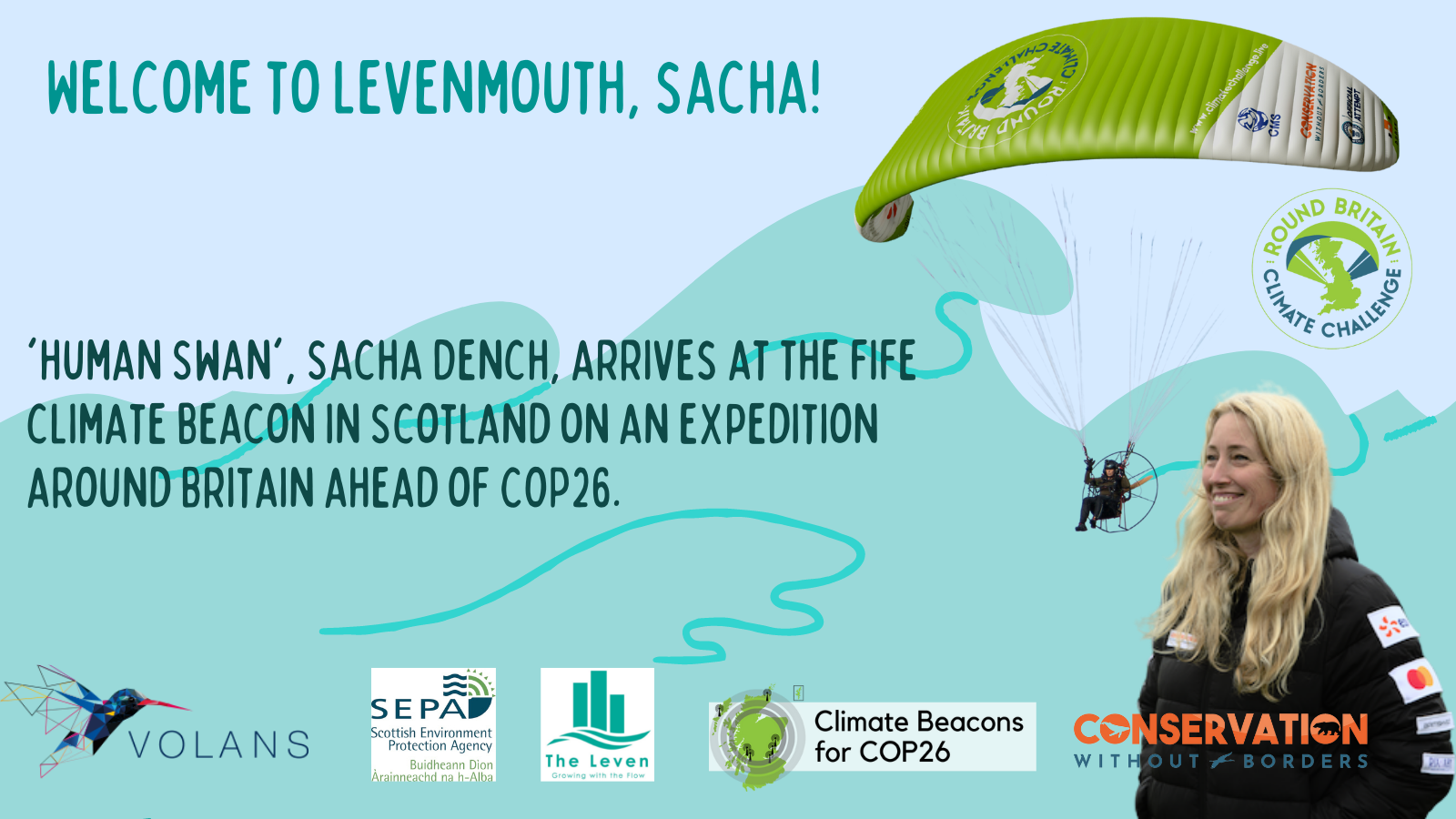